Having
scouted the program of the event I knew that there would be a Master class from
Talisker at 4 p.m. so I called ahead and reserved a spot. Nearly three hours
later – to be exact around 3 p.m. – I got to the venue in the so called
“Mönchsberg” – literally translated to “Mountain of the
monks” – got my badge and was informed that my Master class was delayed
because of the Master class before. So instead of one hour at the venue I’ll
just have two before my Master class would start – which was fine. But then the
nice lady asked, if I’m interested in the last spot for the other Master class
which is about to start (which had a very unspecific topic on the homepage as I
checked beforehand). So I asked for the topic, she replied “Bruichladdich”
and I just handed her the fee (which was incredibly low) without any words. A
Talisker AND a Bruichladdich Master class in a day? I was glad and happy – as
was the Grinch? – that I went to Salzburg. 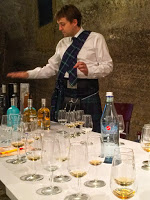 But wait
there were three other Whiskies to taste. But which Whisky could possible top
the Black Art series? If you don’t prefer peated Whiskies the answer is possibly
“none”. But if you do the answer is very easy. Of course the mighty peat bomb “Octomore”!
Jason brought the versions 06.1 (167ppm), 07.1 (208ppm) and of course 06.3
(258ppm). What a finish! These three aren’t cheap either but they are in a
prize range I can relate to.

Of course
all of the seven Whiskies were n.c.f. (non chill filtered) and n.c.a. (no
colour added). Well not “Of course” because many whisky distilleries add colour
(that is E150 – caramel colour, produced by using glucose syrup, sulphuric acid
and ammonia) to their finished products so that every batch looks just like the
batch before. Nearly every distillery filters their Whisky but it is a
difference between “normal filtration” and “chill
filtration”. But I digress, this is stuff for another post!

After the
second master class I just wondered around the little nice venue as I’ve done
between the two Master classes. I had a very good “Highland Game
Stew” – the only difference to the traditional “Irish Game Stew”
was – and I quote here: “My man is from Scotland that’s why it is a
Highland Game Stew”! After a quick chat with Jutta and Thomas from the
SMWS Austria (tasted the 4.183 at their booth) I got the chance to taste the
World Best Single Malt 2015 at the booth of the Whisky Consultants – the “Kavalan
Solist Vinho Barrique Single Cask Strength”. Unfortunately Michael just
opened the last bottle of this Whisky so I couldn’t buy it. On the other hand
if he hadn’t opened it I couldn’t have tasted it and therefore I wouldn’t have
wanted to buy it…