The conclusion of my articles about the Austrian Whisky & Spirits Festival will be about the Masterclass from Bruichladdich, held by the Brand Ambassador (DE/AT/CH) himself, Ewald Stromer. I decided against the other Masterclass (Terroire matters) as I had this Masterclass back in Munich and I was hoping to get a wee dram of the Octomore 7.4, which is currently sold out and will continue to be. I knew from Ewald, that the Whiskys in the other Masterclass would be different from these I had at the Finest Spirits, but that day it had to be peaty! After the private session with Beam, this Masterclass was quite full. A very typical picture, as American Whiskeys are used seldom as shots or neat but rather in cocktails (and in that case you’ll just read “Whisk(e)y” at the cocktail description). As Marcel said at the Beam Masterclass, we (the press, the bartenders, …) have to be Ambassadors too for American Whiskey, not only the official people promoting their products.  American Whiskey is much more than the “typically” Whisk(e)y-Coke drink. 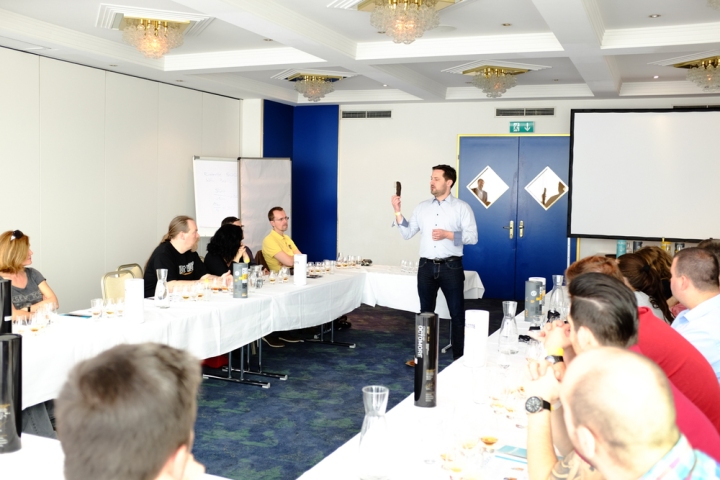 Right after I found a seat I was puzzled a little bit. Six glasses but only four Whiskys on the tasting notes. Well, there is (malted?) barley in one of them but what is the fifth Whisky? We will see. Yes, the Octomore 7.4 (and his “little” brother Octomore 7.1) were present, so this would be a great Masterclass. Ewald started off with the definition of peat, which is mainly dirt or mud. You can call it also humus, which sounds much nicer. Islay is made of nearly 80% peat, but I dare everyone to call this nice little island a piece of dirt (I’d guess the little over 3000 people living there would agree with me)! Funfact: Bruichladdich uses Highland peat for their Whiskys because it is more mineral and less maritime than the Islay peat. Funfact 2: There are two types of peat on Islay, the one “nearer” to the cost and the one “in” the island. Quite funny, given the small size of the island. Don’t you think?

While Ewald being entertaining as ever, we learned that there was nearly no peated Whisky on the market twenty years ago. Most of the peated Whiskys, on Islay are just two quite small woods so they used peat to dry their malted barley, were used for blending. The hype around peated (Single Malt) Whiskys started just a few years ago und will continue very likely. The Swiss for example like this kind of Whisky that much, over 50% sold by Bruichladdich is Octomore there. But I also learned why there were five glasses with Whisky on the table, as we got, besides the Port Charlotte Scottish and Islay Barley, a Valinch from Port Charlotte, followed by the two Octomores.

The word itself (Valinch) is used to describe the pipette made of copper to sample a dram from the cask. It also means “thief”, “cask thief” to be precise. These Whiskys are always available as an unpeated, dedicated to a company worker, and a peated version, selected by Jim McEwan. They are always at cask strength and only available at the distillery itself. Bruichladdich doesn’t colour their Whiskys at all, just like lots of other distilleries, but Ewald demonstrated how to make a “simple” Whisky – in that case the Islay Barley – into a much more older and rare Whisky just by adding E150 (caramel colour) to it. While doing it, he started to tell us a little bit about the new Whisky. How much red wine casks where used and that even some PX casks found their way into that Whisky – NOT. But only a few drops into the experiment we started believing him. Colour doesn’t lie, right? Well, he had lots of fun with his mixing demonstrations, thankfully Bruichladdich doesn’t want to (and doesn’t need to!) colour their Whiskys. I’ll write about colouring (and filtration, as coloured Whiskys have to be filtrated to prevent clouding) another time.

Back to Bruichladdich, to the Octomore! This Whisky is known for its peaty, smoky, burning tires and railway sleeper (not only my words, Ewald used some of them too). At the estate of the Octomore farm on which the dwell from Bruichladdich sources its water is located, Whisky was distilled in the 18th and 19th century, of course without a license as it was quite common back then. The Octomore is a homage to the Whisky made back then at the farm. As said earlier, they had to use peat to dry their malted barley because there are just two very small woods on Islay. So Bruichladdich uses a quite cold and slow drying process which takes six days(!) to complete. While the malt used for Port Charlotte Whiskys is dried also six days, only two days are peated smoke where as for the drying of the Octomore malt it is the fully six days! First off, the slow process dries the malt from the inside out and secondly they get this astronomical phenol content (169ppm, 208ppm, 248ppm) into the malt. The exact content is determined by only two factors, as the drying time is always the same. It’s influenced only by the (very high) quality of the used barley and the (also very high) quality of the peat. Both are products of nature and never the same twice. Well, at least the barley, while the peat is quite consistent. So the phenol contend, which is determined afterwards, will vary from year to year as some years the weather is more hot, some years the weather is more cold, the guys a Bruichladdich just can wait for the analysis and see how much it is this time (and I might or might not have heard that they already broke the 300ppm mark). I’m excited to see what Bruichladdich will do with the next iteration of the Octomore, and the next, and the next. By the way, it was malted barley, used for the production of Octomore! The smell and taste was unbelievable!